"Loving all types of Asian women"

Check out this shameless ad on the D.C. Craig's List. I like how the dude broke it down into ethnic categories, with his rankings largely corresponding to the Asian ethnic totem pole.

Speaking of Craig's List ads, a friend of mine has been posting various personals (including ads seeking out "underfed metrosexual hipster man-children" and Indian intellectuals), and she tells me that one common response is for a prospective date to e-mail a photo of his penis in close-up. I can't imagine that move working, but who knows?

Also, from the same friend, a tip: if you're out eating sushi on a date, do not eat more pieces than you're supposed to. Example: You order four pieces of hamachi to share. Do not horde three. Eat your two and leave the other two for your date, unless you are given permission to take more than your fair share. If you do get greedy, an observant date will note your sense of entitlement and will not want to see you again.

My suggestion in this situation: quickly but inconspicuously wolf down two pieces. Then, during a break in conversation, look anxiously around the restaurant with a vaguely ravenous look, a look that says "where's my fucking food?" Your date will notice and ask, "are you hungry?" You can reply: "Oh, just a little. I had a light lunch, but I can hang on until my soba gets here." If your date is not a bitch, she will offer the last piece to you. That's your cue: take it apologetically but without hesitation, before she changes her mind.

Looks like Jason Overbeck is putting up more content for his movie nerd site Bent Clouds. Be sure to check out the updated links page, with the hilarious photo accompaniment (I especially like the photos that accompany the D'Angelo, Sallitt and Christley links). Appreciate the link, bud, but care to explain why I get the nudie medusa photo?

On this season of merriment and joy: snarkitude

David Poland and Jeffrey Wells are rival movie gossip mavens, the Hedda Hopper and Louella Parsons of the internet. Every two or three years, I'll read them religiously for about a month or so before my tolerance for them wanes and I drop out. Usually, what prompts me to read them is the impending release of some American movie, usually some kind of grand directorial folly/film maudit, that I'm unduly excited about, like The Thin Red Line in 1997 or Gangs of New York in 2002. This year, though, I can't really find an excuse as to why I'm reading them, since no holiday release really has my tongue wagging in anticipation.

Maybe it's the awards season. But there's something about Poland and Wells both that I've always found unbearable in weekly doses. I've always figured it was their tone of insider-y self-congratulation that's the culprit. Recently, after reading them both again for about two weeks, I now understand the nature of their toxicity. You see, they represent that most contemptible of species, the middlebrow snob. How's that? Well, they're the kind of movie enthusiast who take the Oscars seriously but shower contempt on Oscar voters, put together dependably mainstream top 10 lists (that show no effort at a more wideranging cinephilia), and then relentlessly clobber frivolous, obvious targets like Ocean's Twelve, while dismissing both auteur cinema and Asian genre flicks as too obscure and geeky by half. They're the epitome of the arthouse elitist, slobbering over the likes of Hotel Rwanda and The Sea Inside on their way to dissing the high and the low. Beyond taste, they rarely share opinions that qualify as insight; instead, they pass off their middlebrow CW as a form of elevated connoisseurship.[1] This sickens me, yet every two days I'll prowl their sites trolling for "buzz."

My habits might be more sickening, and as you might've guess it, this post is a thinly veiled cry for help. Will someone please get me off this crack?

[1] What folks have got to understand is that the carefully cultivated air of condescending movie snobbery, like the kind practiced on this blog, must be earned -- first by sitting through 8 hour Hungarian opuses, then by wasting away your weekends on retros on the minor works of forgotten Italian auteurs. When you can spell Apitchatpong's full name off the top of your head, then we'll talk. (Wait, that wasn't right, was it? Well, let's just call the guy "Joe.") You're not entitled to adopt the guise just because you know how to ape Peter Travers' top 10 lists.

I'm kind of a biased observer. If you asked me to choose between saving the last surviving print of Eternal Sunshine of the Spotless Mind or saving the last surviving print of every other movie released in North America in the year 2004 except for Eternal Sunshine, I will -- after a two-second close-up wherein I furrow my brow in an expression of deep anguish -- choose to save the former. That might give you an inkling of how much I treasure Eternal Sunshine -- I happen to think it's the most brilliant American film ever made about romantic relationships, about the exhilaration, perils, and banalities experienced by two people trying to make love work.

Of course, not everyone feels the way I do, which is understandable. In fact, if you look at the critical consensus, there are three -- and soon, four -- major releases that have garnered near unanimous acclaim. Besides Eternal Sunshine, they are: Before Sunset, Sideways, and soon, Million Dollar Baby (the rumored heavyweight Oscar favorite). Now awards season is upon us, and you'd expect that given a year with three or four acclaimed releases, you'd see a split among critics groups. Last year, for example, the major critics' groups (LAFCA, NYFCC, and the Nat'l Society of Film Critics) split between American Splendor and Return of the King, with the respected regional critics groups (Chicago, SF, Boston, Southwestern) spreading the wealth further by annointing Lost in Translation or Mystic River the year's best. That pattern should hold, right?

Well, it's not shaping up that way. In unison, the critics have declared Sideways, the American Splendor of 2004, to be tops of the year. In fact, the New York Film Critics Circle vote is reportedly not even close. This is the kind of critical consensus that happens maybe twice a decade. In the 90s, two pictures swept the critics' awards in their respective years, Schindler's List in '93 and LA Confidential in '97. Though I personally favor other films in those years (The Age of Innocence and Short Cuts in '93 and The Sweet Hereafter and Kundun in '97), it's hard to really gripe about the accolades received by the superb, ambitious movies that ended up winning the awards.

Can't hold my tongue here. Granted, I think Sideways is a nice little film, funny in a broad, obvious way, with very good performances. But it's not, by any stretch, a great film. Miles is a self-pitying idealist who needs to overcome his insecurities to take a step forward; Jack is good-natured, selfish, oversexed oaf who will get into trouble time and again. Once those tracks are laid, the movie goes exactly where you expect it to go. Sure, most of the scenes are nicely written and directed, but what I sensed was something like Kabuki theater -- actors going through the preordained paces of "growing" rather than convincing that they've learned from the experience of dealing with one another. So the epiphanies, once they arrive, feel predetermined...a writer's device. In a small-scale miracle like You Can Count On Me, the control freak Laura Linney and flakey Mark Ruffalo wrestle hard with one another and themselves. Like Miles, they take tentative little steps forward. But unlike Miles, those steps feel earned -- Linney and Ruffalo get under each other's skin but learn to grow up a little and accomodate one another, the way anyone grows in a relationship. There are no real relationships in Sideways, just a lot of funny character-based comedy. Wouldn't have griped about it, but when everyone is lauding this unremarkable movie as the best of the year, in a year that saw the release of something as astonishingly creative and moving as Eternal Sunshine, it's hard to resist knocking it down a peg.

So the Right Arm of God is gone. Like the last greatest Sox pitcher of all-time, on December 13, Pedro took the money (locked up by a guaranteed 4th year) and will be pitching out the twilight of his career with the Mets.

It's a shrewd business decision by Theo; a frail, high maintenance pitcher who'll give you maybe 180 IP and a 3.50 ERA isn't worth $50 million over 4 years. The Sox will now have better uses for that money, like divvying it up between Renteria and possibly AJ Burnett or Tim Hudson, much younger arms.

Hardheaded though I may sound, what I really wanted was Pedro to take the Sox's 3 year offer and remained in Boston the rest of his career. The guy gave his best years to the Sox, and his best years were better than anyone else's in the history of baseball. Really. Pedro's 1999-2000 were the two greatest consecutive seasons of pitching, factoring in ballpark effects, K/IB ratio, etc., all-time. But stats don't reveal the extent of Pedro's dominance. When he was on, professional hitters look like 5th graders swinging polo mallets. They flailed away, completely overmatched. Grown men were humiliated on national television. There were the legendary games to document his superpowers: 17Ks at Yankee stadium, the 1999 All-Star Game, and in one of the great performances in sports, an injured Pedro strutting to the mound and no-hit the fearsome Indians for 6 innings with a fastball in the high 80s in Game 5 of the ALDS. But what I'll treasure most are those days when I'd rush home to catch Pedro on ESPN and just shake my head in awe as he'll throw four nasty curveballs in a row to whiff A-Rod, followed by an assortment of low changeups and high heat to K Griffey. The man was an once-in-lifetime virtuoso with the baseball, the likes of which we'll probably never see again. 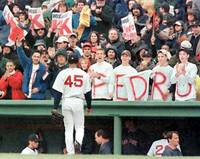 There were days and there were Pedro days. Pedro starts. Pedro hasn't been Pedro this year, and it's likely he ever won't scrape those heights again. Or even come close. Just the same, I wish he stayed. Just like I wish they kept Nomar. Maybe I've got a sentimental streak, but I like to think baseball is a game where continuity matters. If not practically at least emotionally. You give your heart to a team like in no other sport (read Tom Verducci's SI Sportsmen of the Year cover story, if you don't believe me). But it's hard to maintain that bond with a team when the players you've come to love suit up in Royal blue the following year. I know, times change. The Sox won the Series, and Pedro got an offer he can't refuse. Can't blame him for taking the money, and I certainly can't blame Theo for being smart about not overpaying. I just wish, just once, a player will take a discount and stay. Just because.