Tales from the Last Two Weeks of Survival in Bushworld...

10. Darth Cheney shoots a dude in the face, waits 15 hours before going to the Sheriff, another 3 hours before the press learns of the incident from the ranch owner. Cheney then continues to cowardly stonewall the press, per standard operating procedure.

09. Bush's budget is all smoke & mirrors. Like a spendthrift teenager transferring between credit card accounts to hide his reckless spending habits from his parents.

08. Largest public land firesale is proposed by Bush. Why do I have the feeling big developers that contributed mightily to his campaign will be snatching up these public lands at pennies on the dollar?

07. Bush declassifies info to spin the illegal wiretap program. But he never answers the question: how do these terrorists propose to hijack a plane and run it into the Library Tower with a shoebomb? By blowing up their own foot? By blowing up the plane in mid-air? By threatening to blow up the plane? Wtf?

06. Cheney authorized Libby to leak classified info for political purposes; Cheney cherry-picked intelligence to justify war. And french fries are yummy but not so good for you. 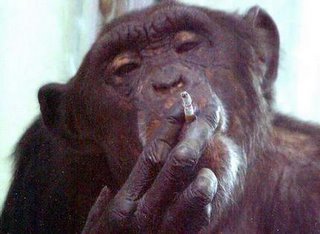 05. Bush and co. totally unprepared for Katrina, despite early warnings. It's so bad even House Republicans couldn't whitewash the debacle. In other news, it snowed in Greenland today. And some kool-aid-imbibing morons will continue to insist that we are more secure because these jokers are in charge.

04. Bush's war on science continues: if the experts and research go against Republican dogma, reject the research.

03. Gonzo clowns the Senate Judiciary Committee on illegal wiretaps. Where are the Democrats to press the Bushies on their lawbreaking, especially since new polls show that the American people do not want an imperial presidency? Heeding the idiotic advice of their spineless loser consultants again?

02. The Bush administration in a nutshell: 24-year-old right-wing Bush campaign hack gets a plum PR job with NASA. Proceeds to edit NASA scientists' work to conform to administration propaganda, injects superstition into his memos, and asserts that climate change is simply a figment of the "culture war." Turns out he lied about his college degree on his resume and was forced to resign late last week. Lying hacks over facts.

01. The Continuing National Disgrace that is Guantanamo. Turns out the majority of the prisoners held indefinitely in our torture chambers aren't "enemy combatants" picked up on the battlefield at all, but random people handed by warlords to American troops for a bounty. A useful summary of the National Journal articles here. So we're torturing a bunch of people that we have no evidence of being linked to any terrorist groups. How does this make us more secure again?

UPDATED: This Dahlia Lithwick article summarizing Everything Wrong with Gitmo is so good it has to be linked.

As a reminder: these clowns lead the free world.

Last note: the best blog post of the last two weeks: the morphing of conservatives into Bush cultists. Glenn Greenwald has quickly established himself as one of the most lucid writers in the blogosphere.

Last, last, last note: always wanted to post a This Modern World cartoon. Check out the archives -- Tom Tomorrow really nails the current state of affairs. We'll see if the above scandals play out according to form. 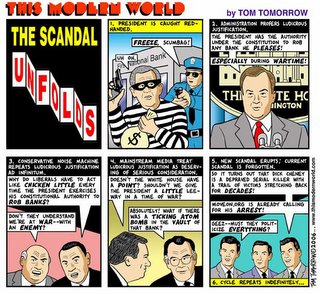