War of the Worlds (Spielberg): B

The plant & payoff I expected never arrived: Tom Cruise, the gearhead with an engine on his kitchen table, did not miraculously locate a mechanical weakspot in the tripod and used that knowledge to defeat the aliens. Good job sticking to the ironic H.G. resolution. And the first hour is sheer sustained brilliance: like the devastating first act of The Pianist, you're put in the middle of an unfathomable assault on humanity, viewed through the eyes of one man. At its best, War is a totally immersive vision of a Hobbesian state of nature. Coming out of the movie, I can't help but ponder what a pittance my daily problems (that day it was losing my car keys) are when set against the possibility of civilization rupturing at the seams.

A pity the movie faltered so badly down the stretch. War ends up as a typical "late" Spielberg: superb visual storytelling of dark material that's undermined by a roasted marshmellow core. As with most of his recent works, Spielberg's unable to think through his premises and abandons the darker implications of his story in favor of canned explorations of the absent father/mother theme -- subjects on which Stevie has absolutely nothing left to say. Outside, tripods are disintegrating human flesh. In the basement, Cruise is trying to be a better father by singing lullabyes. Hackneyed development of "auteurial concerns" aside, the [SPOILERS!] Cambridge reunion ranks with the AI coda (sorry AI apologists, it's as "dark" as my bare ass), the Saving Private Ryan bookends, and Amistad's "give us free" as Spielberg's nadir -- they're scenes which betray an incorrigible taste for wishful thinking and hokey sentimentality. Also, note to Janucz Kaminski: Your trademark creepy backlighting is not needed to turn Dakota Fanning into the most freakish looking 11-year-old on earth. She already is. Thanks. (She has the mien of Bette Davis's Baby Jane aged backwards to eleven. Creepy as all hell.)

20 years from now, when scholars dig through the cultural detritus of the Bush era, they would be well-served to ignore the 300 cheapo lefty docs on the shelves in favor of Romero's latest zombie movie, which is as potent a movie about the Iraq mess as one can imagine. The Green Zone. Abu Ghraib. Military contractors wrecking havoc. Relentlessly murderous insurgents with inchoate motivations. It's all here, and not done with a heavy hand. If only the actual zombie movie on the surface was more involving, we'd have an all-timer like Dawn of the Dead.

Just moved to a new place and having trouble fitting in? Watch this movie and you'll discover every possible permutation of outsider alienation. Too mousy to rein in your students? Too idealistic and pompous to win over co-workers? Too socially awkward to mesh with the cool locals? Too socially unaware to not better disguise your stalking of a new friend? Like an adult version of Welcome to the Dollhouse, this theater of humiliation is well observed and ends well,but doesn't completely work -- mainly because it's grindingly repetitive but also because the heroine's behavior just wasn't very convincing. She alternately acts like someone who knows social rules but lacks social graces (making obvious lies to try to cover up her stalking) and someone utterly ignorant of social convention (hounding her New Best Friend as soon as she gets in her house door over the phone). Social nincompoops tend to be one or the other. Unless, of course, that social nincompoop happens to be a character in a movie that demands a progressively worse humiliation in each new scene.

Purists might object to the LA Film Fest's program featuring live DJ scoring of silent classics in the majestic outdoor setting of the Ford Amphitheater, but a few missteps aside, I thought local DJ legend and Beat Junkie J.Rocc's live score of Murnau's silent classic was witty and thoughtful, if somewhat anachronistic. He'd have to starting mixing in Ja Rule to detract from Murnau's most expressionistic work, which ranks with Emil Jannings' The Blue Angel as the apogee of cinematic humiliation narratives. The centerpiece, a nightmare in which the gargoyles in the neighborhood go US Weekly on fallen doorman Emil Janning's ass, may be the greatest strech of filmmaking in Murnau's brilliant body of work and the most horrifying depiction of social humiliation put on film.

So what if he's stealing from himself? Hey Ya! Miyazaki is one of a kind, and his latest visionary movie re-assembles previous Miyazaki tropes (castle, alienated girl, effete flying spirit guy, weird little creatures, transportation device that's "alive," pacifist message, stunning 19th century Dutch-looking cityscapes) to come up with a movie that's mostly involving and always stunning to behold, especially the background mattes of the Euro-city and the flower field.
Doesn't make a whole lotta sense and the ending's too maudlin, but it's awfully churlish to complain when you get cool shit like that transporting door or the awesome dog?

Cutesy childhood ditties shifting suddenly into emo navel-gazing that finally careens into anthemic catharsis. Architecture in Helsinki, like The Fiery Furnaces, are at the forefront of indie eclecticism -- and their show was a blast whenever they didn't give in to self-indulgence, as when the lead singer suddenly veers from delicate Belle & Sebastian whimsy to aping gravel-voiced Tom Waits in the same stanza. The raucously anti-harmonic horn section reminded me too much of the Stanfurd Marching Band for comfort, but overall I had a good time. As for the opener, Scrabble's songcraft and arrangements have gotten more sophisticated since the last time I saw them, but the sound system didn't treat 'em right that night.

Alternate title: Me and You and Everyone We Know. Half of LA was out for this show, and Arcade Fire stepped up to the challenge. Opening their set with the can of whupass that is "Wake Up", they just absolutely rocked the Bowl with that dense 9 piece sound, which included eight songs from Funeral and two new songs, and finishing the twin killing of "Tunnels" and "Power Out". In between, just sheer euphoria including a wrenching rendition of my favorite AF song, "In the Backseat", a song of shimmering, fragile beauty. David Byrne, decked out in a pastel pink suit, had a hard act to follow; first half of the dude's set was his solo stuff, which marries arch, child-like character sketches to an afro-beat sound. It was only when he broke out the Talking Heads' greatest hits ("Psycho Killer," "Burning Down the House") that the joint started buzzing, and the finish, a cover of Beyonce's "Crazy in Love," backed by a frenetic marching band, was against all odds, fucking awesome.

As many reviews have noted: Guero:: Odelay as Sea Changes :: Mutations. This is the first Beck album that doesn't surprise. I enjoy the experiments with latin rhythms and bossa nova beats, but mainly, it's Odelay redux. But what's wrong with repeating what's worked, even when you're Beck? Favorite tracks: "E-Pro" (so it sounds exactly like "Devil's Haircut"...your point is?) and "Girl". 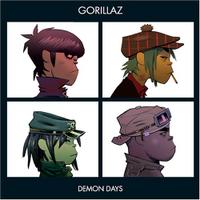 Fuck Blur. Gorillaz is where it's at. This sophomore album does what "side projects" do best -- takes chances, drains out the fat, and best of all, leaves the whiny posturing of 90s Britpop behind. This is just make catchy, funky pop. The production is less adventurous in this new album, the by-product of replacing beat genius Dan the Automator with the hyped-but-predictable DJ Danger Mouse, but they hit some smokin' highs here, including the Kanye West-inflected "Kids with Guns" and the killer bass line of "Every Planet We Reach is Dead." No sophomore slump here.

People who only listen to skinny sensitive white boy music are lame. Here's one reason why.

Far and away the best book I've read on NL Hold'em play. What's great isn't learning new ideas, but the way Action Dan lucidly applies advanced NL principles to specific situations. Remember the pre-flop re-raise Action Dan made w/ 6-2 in the 2004 WSOP, getting AQ (David Williams) and an EP raiser (Josh Arieh) and MP caller (Greg Raymer) to fold? Genuflect before the intricate reasoning Dan goes through to arrive at this textbook "Squeeze Play" with everything on the line. Learn about the "M" and "Q" and making moves in the orange zone. Unfortunately, everyone else is doing the same: I see that both volumes of Harrington's treatise are on the Amazon top 50 bestseller list, ahead of David Sedaris, Jared Diamond, etc. Putting aside what that says about the poker craze, widespread dissemination of these potent ideas is definitely -EV, as poker nerds might say.

The Professor, the Banker and the Suicide King: Inside the Richest Poker Game of All Time, by Michael Craig 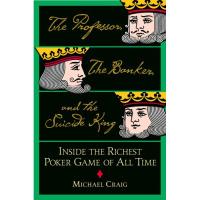 Aspires to understand what makes the gambling mind tick, but Craig's much better when he drops the half-assed psychological musings for narrative. Andy Beal, a rich banker, challenges some of the greatest poker players in the world, including Doyle Brunson, Chip Reese, Jennifer Harman, Howard Lederer, et al. to games that reach $100,000/200,000 limit heads-up. Good to know that even the most famous poker pros lead crazy, rollercoaster lives, but Craig could never really get inside the action, and so the book's like a kung fu movie with the final confrontation cut out. You just don't get a sense of how the players played. A good glimpse into the lifestyle and relationships of these poker pros, but not enough game.

Freakonomics: A Rogue Economist Explores the Hidden Side of Everything
By Steven D. Levitt and Stephen J. Dubner

I'm only about halfway done with this book-of-the-moment, a pop econ tract that deals largely with the effectiveness of incentives as it's applied in weird scenarios -- sumo wrestling, KKK, etc.. Levitt's main concern is setting up incentives that would encourage or discourage cheating, but none of the revelations I've seen so far justifies the hyperbole of the subtitle. (But of course, I'm biased in that I find economists too often presume too much rationality in the decision-making and behavior of human actors) Thus far, Levitt lays out a lot of counterintuitive-but-not-so-upon-reflection points that's interesting but not mindblowing. Still, I'm glad to see someone put down real estate brokers (the real leeches of society). And I await the chapter that outlines his most provocative thesis, that legalization of abortion has brought down the crime rate (something I've always thought was intuitively correct, but glad to see some supporting data on).

Countdown to a Meltdown, by James Fallows in the Atlantic Monthly.

In a fictional memo to a 2016 presidential candidate almost certain to win, Fallow lays out an apocalyptic scenario tying together Iraq, currency policy, budget deficits, oil supply cutoffs by Hugo Chavez, China cashing out government bonds, environmental disaster, the real estate bubble, and our lagging education problems into a domino spiral. There's a terrifying logic to the scenario outlined therein that's all too plausible. And here I thought I was pessimistic about where the country is headed.

Climate of Man by Elizabeth Kolbert in The New Yorker. Part 1, Part 2, and Part 3. (Thanks to Phil in the comments section for the assist.)

Do yourself a favor. Print out all three parts, preferably on recycled paper. Or maybe the backside of drafts you were meaning to trash. Read all three parts. Thank you. Unless you've read it already, then which, holy fuck, this is some scary shit, eh?