This just in: Memoirs of a Geisha will suck the holy ass. Yup. You heard it here first. Or maybe you heard it somewhere else first, and this is your fourteenth reminder that this movie is bound to suck. But here it is (again). Please be reminded that there's a better chance of democracy flourishing in Iraq in a year than Memoirs being anything other than shitty. Heck, there's a better chance of Lars von Trier's slave epic Manderlay being watchable than there is Memoirs.

Before I continue with the hating, I must first say that I'm not down on this movie's prospects on the grounds that Zhang Ziyi's butt has somehow betrayed 5,000 years of Chinese self-determination. Actually, I'm fine with that. ZZ's butt can do whatever it likes, including, but not limited to, subjecting the denizens of the Middle Kingdom to further humiliation. And unlike my (ethnically Japanese) aunt Mich, who railed against this movie's casting the entire Thanksgiving weekend, I'm not especially offended by the Sino-centric casting choices. Don't Asians all look the same anyway? Lastly, while in the past I've resisted Zhang and her emotional limitations, she's proved herself capable of giving fine performances, at least when she's listening to Wong Kar-wai's marching orders.

So what's the problem? Where to start? Let's see. First, there's Chicago, a film so ineptly directed that you're better off watching your local junior high production. The hack responsible for that embarrassment is at the helm for Memoirs. If his abysmal credentials weren't enough, Rob Marshall's hackery can already be glimpsed in the laughable trailer, which showcases a torrent of derivative Japanese imagery (flat, symmetric compositions! colorful kiminos!) stolen from the likes of late Kurosawa, the Shogun TV mini-series, and The Pillow Book. Egad. 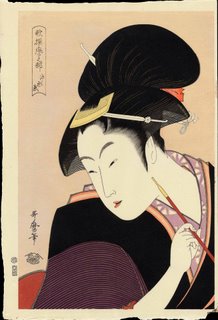 Then there's the notion of a geisha movie for Western audiences. I don't think I'm particularly touchy about implications of cultural imperialism or Orientalism. I laughed off my mom when she told me Crouching Tiger is just a sell-out movie made for Western eyes. But this project just screams cultural sensationalism. Most people don't know what a geisha is. They assume that it's the Japanese for "call girl", but that's not quite what geishas are. They're rarefied courtesans who entertain a certain class of men. Exotic, yes, but geishas do not typically lead the lurid life found in the popular American imagination.

No doubt the geisha milieu can be a fascinating subject for movies. Kenji Mizoguchi returned to that world again and again, coming up with such poignant geisha studies as Sisters of the Gion and Street of Shame. The geisha world fed some of Mikio Naruse's best movies as well, including Flowing, Late Chrysanthemums, and (reputedly) When a Woman Ascends the Stairs. As always, Mizoguchi's concerned with the plight of female suffering brought about by abandonment. Naturally, geisha became a recurring subject for Mizoguchi's vision of women tragically imprisoned by the callous choices of men. Naruse, meanwhile, found the geisha a natural for his examinations into lives of quiet desperation; the geisha house is a perfect microcosm of his vision of a reified world, where personal relationships are defined by the financial transactions between the individuals.

So if you want to watch movies about geishas, why not turn to Japanese masters who know the milieu intimately (Mizoguchi, especially, was known as a frequenter of geisha houses)? It sure beats a bowdlerized Western superproduction helmed by a dude who can't even competently translate to the screen a broadway show about a midwestern American city, right?

Okay, so maybe I'm acting like a big snob. Give it a chance, and who knows? The Red Sox won a World Series recently, so anything's possible, right? Sorry to burst your bubble, but if you're still optimistic about Memoirs, let me direct you to a review from the proudly anti-elitist The Hollywood Reporter, a publication not known for their concern for verisimilitude in movie portrayals of non-American cultures.

The filmmakers have made the characters crasser, they ignore nuances within geisha tradition and give characters attitudes and dialogue highly unlikely for Depression-era Japan. The heroine, who in time becomes a legendary geisha, is modeled in the film more after a willful, modern American teen than a young Japanese woman...She performs a dance on her first night as an apprentice, something that would never happen. She makes sharp ripostes with her rival, dialogue more in tune with a ‘30s American film comedy than ‘30s Japanese culture. A dance performance at one point, choreographed by John DeLuca, feels like a modern Western interpretation imposed on Japanese tradition, more "Chicago" than Kyoto as it were.

When Kirk Honeycutt is dissing a movie for its cultural inauthenticity, you know you're getting the sub-Disneyland version. Remember, the implicit purpose of this movie/book is to provide a revealing glimpse into a secret world. So cultural authenticity is not only important, it's the film's raison d'être.

Yeah, anything is possible, but what are the realistic chances of this movie being any good? Let's be honest. You'll have better odds betting that Tom Cruise will come out of the closet on Christmas Day, 2005.
Posted by Ryan at 1:16 AM