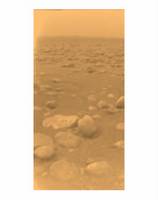 View of the horizon from Titan. (Actual orange-colored sky.)

I don't know how many folks here are following the photos and data from theHuygens probe on the surface of Titan, the only satellite in the solar system with an atmophere, but the whole thing is fucking amazing. Earth-like geology, except instead of water the dominant liquid is liquid methane. There's also a shoreline. I've always been fascinated by the Galilean moons (especially Io and Europa) and Titan, the only probable astral bodies in our solar system that might host life. And now they've landed a probe on the suface of freakin' Titan, partially by using Venus' gravity to sling Cassini, Huygens' carrier satellite, over to Saturn's gravitational field. Sometimes, technology can be so awesome.

Closer (Nichols) B-
In a nutshell: Carnal knowledge corrupts.
Amazon movie match: We Don't Live Here Anymore[1]
To read a more eloquent take, what he said. Also him. And him, to a degree.
The skinny: Hollywood never makes these kinds of adult-themed films anymore, except Closer feels like a Dungeons and Dragons geek's attempt at making an "emotionally honest" French movie. Each character is armed with a couple of devastating weapons and afflicted with a couple of weaknesses, except the blood drawn is from the heart, rather than from the flesh:

Like a video game, the play...I mean, the film stages one-on-one battles, going through all the permutations to see which player comes out on top. Or as James puts it nicely: "it's the bastard child of the screwball comedy and the Prisoner's Dilemma." Nobody comes out on top, of course, and that's the idea: Closer's thesis could well be the credo of miserablism. As expressed by Alice at Anna's ersatz-Diane Arbus show, the movie suggests that the only truthful art is one that shows what's real, to examine the misery and rot beneath the glistening skin (unlike 3 of the 4 main characters, who are all pointedly obsessed in some way with skin and surfaces (dermatologist, stripper, portrait photographer). The one who isn't, the writer who worships at the altar of "truth", ends up worst off.). The messages is: everyone's miserable if you deem to look closely enough.

That simplistic message is supported by a seemingly clever structure: a bunch of meet-cutes followed by a series of lacerating confrontations, with scenes of the pairs' courtship and lovey-dovey happiness totally elided. Presumably the creators think this is a more truthful approach, but it's hard to care about these relationships when, as Alice says at the end of the movie, you can't feel or sense or see the love. They're just words in this movie. And words is another problem: the characters here are so acutely self-aware and perceptive of others' emotional weaknesses that the revelations don't arise from interaction between characters but from self-revealing monologues spewed during the confrontations. It smacks of writerly indulgence. Misery, misery everywhere, but is that because that's the truth, or because that's only what the movie deigns to show us?

[1] Like Closer, We Don't Live Here Anymore is a chamber drama that examines how the game of adulterous musical chairs affects four damaged characters with very different emotional make-ups (along the possessiveness/nonpossessiveness axis). In a way just as schematic as Closer, and not as sharp or entertaining in any given scene; but the relationships in Curran's movie feel real and lived-in, especially between Ruffalo and Dern and Ruffalo and Krause. Because the people are more fleshed out in We Don't Live, the conclusion packs a much greater wallop. Or to put it another way: Curran's film is about the toll infidelity takes on relationships, whereas Nichols' cares mainly about the gamesmanship itself.

One last thought of an autobiographical nature: Back in law school, my friend Mumon and I (independently) devised our own "free market" theories on approaching relationships, which is about minimizing limitations on behavior (to a reasonable degree) so that our mates don't feel like a prisoner chained by hard-and-fast rules. It's premised on a generous view of partner-choosing, but personally, I also endorsed this idea because it at once validated my non-possessiveness in relationships while providing a rationale for why my (then) rapacious appetite for female attention should be given free rein. And I suffered from the hubris of believing that my partner wouldn't ever leave me. As you can imagine, the idea in practice was a bust, at least for me. Both We Don't Live Here and Closer can be interpreted as case studies on the emotional savagery that can come to those who live by this kind of free-market approach. Neither is completely convincing, but as cautionary tales go, you can't help but fear the vision these movies present of lives that are solitary, nasty and brutish, though not necessarily short.

A couple of Francophone links

* A primitive but charming music video of Anna Karina and Serge Gainsbourg doing a duet.

* And I can guarantee no trailer this year will be cooler than the one for the re-release of Godard's Masculine Feminine. (Click on the link on the left.)