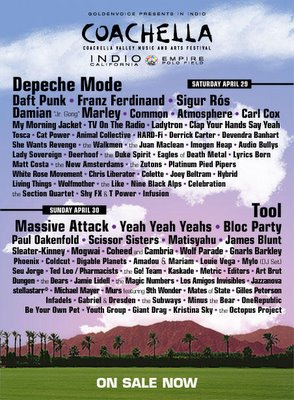 After skipping last year's event, I'll be making my third trip in four years to the Coachella Valley Music Festival. A couple of years ago, we had the Pixies reunion. This year...Tool?!? Suffice it to say the lineup hasn't quite blown me away. Only Massive Attack's belated addition can be described as exciting. Come on, Depeche Mode? As for the rest of the lineup, here's how I'd categorize them:

Bleh. Paul Oakenfold, Scissor Sisters, My Morning Jacket (though I do have a burnt copy of It Still Moves), James Blunt, Tool, Ted Leo & the Pharmicists, Depeche Mode (though I do own Catching Up...), Daft Punk (though I do own Discovery).

UPDATE: The Material Girl herself -- yes, Madonna has been added, and she'll be performing in the intimate venue of the tent, no less. A sell-out is now assured. No word on whom she'll tug along as lesbian stage-show partner. (I previously saw Madonna at the Anaheim Pond back in 2004, the blow-by-blow of which was reported here, probably the only okay thing I've ever posted on music, if my judgment on my own writing can be trusted.)

Art Brut: the kind of overhyped Brit post-punk (neo-punk? retro-punk? whatever...) band you approach with caution, but can't help warming to.
Deerhoof: Okay, they officially rule.
Davendra Banhart: Supposedly a highly experimental, genre-crossing mimic, what I heard on the player was just straight- up blues-influenced folk. But the cognescenti's choice, so definitely will have to check him out.
Giant Drag: The "Kevin is Gay" song on the player is super-catchy shoegaze pop, like warmed-over Breeders. I mean that in a good way.
Jamie Lidell: decent but unremarkable soul revival stuff from what I can tell, but it'll be a good break from wimpdie pop since I ♥ the Otis and Sam Cooke stuff the dude appears to be alluding to.
Lyrics Born: Now I remember: This dude was a key contributor to Blackalicious' quite awesome Blazing Arrow and had an acclaimed album come out a couple years back. Still limited exposure, but good enough for me.

Please drop a comment if you've got some dope some of the more obscure bands in the lineup. Thanks.
Posted by Ryan at 5:03 PM