Taking an afternoon stroll, you notice a few Lite-Brite things that look like little Kool-Aid Men scattered about. See video for more:

So what do you do? If you're the retarded mayor of Boston, you shut down the city and send in the bomb squad. Afterwards you blame everything on the guerrilla marketing team from the "Aqua Teen Hunger Force", calling them terror hoax perpetrators, when the city could've saved all that money and inconvenience to Bostonians just by asking any reasonably savvy young person what the heck is up.
Posted by Ryan at 2:48 PM 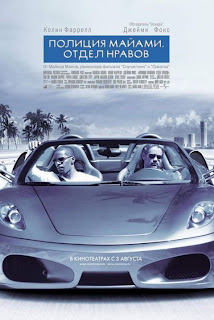 Every year, there's one or two "visual reverie" type films I'd love to play on a silent loop on a wall-mounted LCD flat-screen. Last year such luminous motion paintings include 2046 and The New World. This year comes The Intruder, Three Times, and Miami Vice. The last one, though, is the only one of these I wouldn't want to watch again with the sound on.

Reg'lar folks can't stand this movie, if my experience is any guide. But movie nerds and critics? An altogether different reception. It finished higher than Babel and Little Miss Sunshine in the definitive highbrow poll, for example. And some of my favorite critics list this as one of their year-end favorites. That Miami Vice would generate this kind of schism is, I suppose, not so surprising. Genre machinery that gleans with personal style and crafted by a brand name auteur is exactly the thing that appeals to a certain kind of cinéaste. And Mann's one of the undeniably great directors on the scene today; I can watch those shots of florescent neon reflecting off dark waters all day. But what about the stuff everyone's complaining about, the idiotic story and the scowl-and-pose acting? Why, that's minimalism, boy. Mann's harkening back to the existential genre pics of Monte Hellman, or maybe the stripped-down Westerns of Budd Boetticher, or don't you know?

Maybe. But however you cut it, the throwaway story is retarded, and 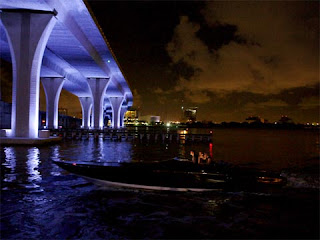 the acting sucks. As achingly beautiful as it is -- the movie's splendorous lighting is worth many extra looks (just check out the still on the right borrowed from the always excellent Bryant Frazer's top ten write-up) -- the regular moviegoers are closer to being right than the cinephiles.

The real problem? Mann's fatal flaw, self-importance. In some up-is-down formulations, the unearned "gravity" somehow gives this film meaning -- the movie's erstwhile stupidity is by design, woven into this movie's supposedly fascinating minimalist fabric. Who cares if the angst of these D&G-garbed cyphers were utterly contrived -- standard oh-did-I-cause-her-death, oh-how-do-I-tell-her-the-truth nonsense? Doesn't anyone care that Mann lards a TV-show adaptation with gobs of emotional anguish, without any devotion to the characterizations or fleshed-out relationships to match? I could be missing the point. Guess it might be passé to prefer one's Handsome Boy Modeling School cheese without all the calories.

* Bonus: I got my hands on a top-secret tape showing Michael Mann and Colin Farrell rehearsing before principal photography begins; for the benefit of you fortunate souls, I will transcribe it:

Michael Mann: Shooting starts tomorrow, Colin. You ready?
Colin Farrell (excitedly): Yeah, Michael. I think I finally have Crockett down.
Mann: That's great, Colin. Remember, Crockett's filled with fuckin' anguish. He's caught between the woman he loves and the fuckin' cops he's deeply loyal to.
Farrell: I know, man. Look, check this out. [Farrell tilts his head slightly. He squints, looks out into some indeterminate middle distance, purses his lips, and, with his face turned at a 3/4 angle, begins to mumble in a deep monotone]: "I'm gonna do every scene just like this."
Mann: Excellent! I can feel your anguish, man. So much fuckin' anguish!
Farrell, still squinting and holding his pose, mumbles something.
Mann: What? What did you say?
Farrell (breaks out of character): Let's do a few lines!
Mann: Yeah, sure. Let's see. [Thumbs through script] Yeah. This scene is the emotional center of the whole fuckin' movie. I spent countless fuckin' hours laboring over these lines. Let's give it a shot...
Mann [In a "Tubbs" voice]: "Are you ready for this?"
Farrell [squints, looks out into some indeterminate middle distance. He turns his face towards no one in particular and mumbles in a low monotone]: "I absolutely am not."
Mann [out of character]: That's perfect! Perfect! You're gonna make people forget that motherfucker Don Johnson ever existed, Colin!

The Prestige (d. Christopher Nolan): B+ 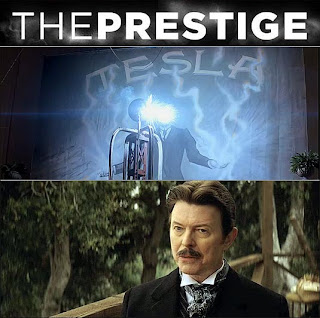 Not every movie needs to be "about" something, but some movies are impressive chiefly due to the movie's meaning. This is a textbook case. Really, this movie is so rich in subtext you can pick and choose from the following interpretations [VAGUE SPOILERS WITHIN]:

(a) The necessity of illusion: or, how people learned to stop worrying and learn to lie to themselves. The idea here is that scientific materialism -- the so-called "real magic" represented by Tesla's "multiplier" device -- is so horrifying that we'd rather believe that the whole thing is all some kind of optical illusion. Magic is one of the many ways in which the audience would rather accept lies than to face up to the meaninglessness of "scientific truth", which calls into question even the very idea of the "miracle of life", the generally accepted proposition that each and every life is special and unique. This compliments Nolan's Memento, which is also about the lies we tell ourselves in order to give our lives meaning. Mike has more precise reading in the same vein: "that only extreme self-sacrifice can rescue us from our dawning certitude that science has eliminated all mystery from the world".

(b) An allegory of early and late capitalism. Set during turn of the Twentieth Century, the movie links the cutthroat competition between Edison and Tesla with the can-you-top-this? antics of Angier v. Borden. Unlike some magician films, these magicians aren't so much interested in the "art of magic" as they are consumed with winning in the marketplace. Neither one cares much how he tops the other guy; just that he does. In doing so, each one engages in the kind of tactics you find in your daily business page: employee poaching, sabotage, swiping trade secrets, deceptive marketing, etc. In effect, the magicians play out a lose-lose scenario you find in non-zero-sum game theory. Since becoming much more interested in business decisions/business news the last few years, what I found most fascinating was the contemporary echoes in the competition between Borden and Angier, which, like the one between Tesla and Edison, the film suggests, is a battle between the innovator (Borden/Tesla) and the popularizer (Angier/Edison). Borden invents the "transported man" but Angier's was able to steal the idea and popularize it through superior presentation/marketing -- at least until the Borden started exploiting the "bugs" (the drunken Angier look-alike). It's like the paradigmatic battle between Apple and Microsoft -- the better product vs. the more opportunistic and vicious business.

(c) The wages of obsession. The movie depicts the self-sacrifices that fuel obsession. A fairly obvious theme that I won't dwell on, but this also recalls Memento.

(d) Duality vs. Multiplicity. I'm sure someone can offer a good reading for this, but you won't find it here.

Even ignoring the subtext, what you got is one of best kinds of stories, the tale of the dueling magicians. See, e.g., the real story of Ching Ling Foo vs. Chung Ling Soo. If I'm not higher on this movie, it's only because I'm resistant to movies with twist endings, especially one involving devices you find in daytime soaps, like [CENSORED BY SPOILER POLICE]. Also, there's something nutty about the Tesla machine that bothers me, too many implications that the movie ignores. But still, I expect I'd dig this even more on second viewing.
Posted by Ryan at 3:56 PM