One of the greatest, and most unheralded web inventions is the gamecast/gameday. Live play-by-play of baseball games, coupled with following witty, rambunctious internet message board game-threads, made you feel like you're watching a game at a bar with your buddies, even as you're simultaneously trying to churn out an outline in your dorm room.

In my late twenties, spent in Berkeley and Ann Arbor, every fifth day during the summers and fall held out a special promise. It's not that breathless anticipation you feel when you're going on a date with a woman you've fallen for. That would be overstating it. But as soon as you wake up, the air seems, well, fresher, more oxidized even. You sense that something electrifying might happen that night (or afternoon). That's because Pedro's taking the hill, and if you can't be in front of the computer or tv, you might miss a 17 K two hit masterpiece. The sheer dominance is something else (Pedro's run with the Sox is arguably the best run of any pitcher ever), but what made Pedro one of a kind was the way he'd throw five consecutive change-ups, or an unhittable 3-2 bender to strike out Albert Belle or Ken Griffey, Jr. To paraphrase those (awesome) Nike ads on Brazilian football, Pedro pitches beautiful-- incomparably so.

I'd trade my left nut to be in Fenway an hour from now to give Pedro a thunderous ovation loud enough to shatter those plastic Coke bottles perched atop the Green Monster. 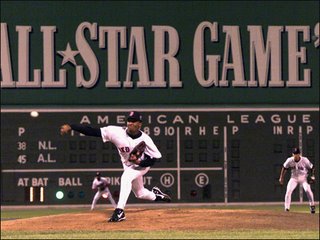 * The only game I saw this year was at Dodger Stadium, where I saw Pedro pitch opposite Derek Lowe. The Sports Guy said all there is to say about this game straight out of the Twilight Zone. All I can add is I hope Pedro does better tonight (and also: the Mets fan in Reserve section 8, row N, seat 8, please shut the fuck up. Everyone in the stadium will thank you.) I can't root for him to win, but I hope he matches zeroes with Josh Beckett for 7, and the Sox win it in the 9th. On that note, I've got to rush home to catch the game.

** The miracle of technology has brought us mlb.tv, so you can catch most non-blackout games of all your favorite teams, right on your computer screen.

*** It also included immediate access to baseball's equivalent of Bible study, Peter Gammons' densely packed Sunday Globe columns. Formerly, I had to troll Barnes & Nobles or Cody's Books on Monday, open up their big out-of-town Sunday paper, and savor the sports pages secretly by the magazine rack. Thank you, world wide web, for sparing me from such future indignities. Gammons, who's now nearly as identifiable with baseball as John Madden is with football, suffered an brain aneurysm yesterday. Sounds like he's on the road to recovery. Best wishes to him.

NB: Wow. The Fenway crowd did Pedro right, but he had nothing tonight. Maybe the emotions got to him. Fastball in the mid-80s wasn't gonna get it done, especially not against the deepest lineup in baseball. Also, when did the NL become AAAA? After noticing the staggering disparity between the leagues, I had the inkling to start betting AL "across" -- AL teams on every Interleague matchup -- on Monday. Didn't get around to doing it. At $20 a game, I think I would made a couple of hundred bucks over the last three days. The AL has been the superior league for the better part of the decade, but the gap has never been so pronounced.
Posted by Ryan at 1:33 PM