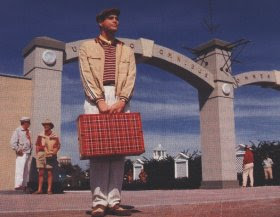 You know that disorienting sense that the world's coming off its axis, that somehow you've been transplanted into a bizarre alternate universe where everything is just a little off? I get that once in awhile, maybe once a year. Usually it comes the day after the Oscars, when I become mystified by the bizarre assessments of the telecast from the nation's most renowned TV critics, wondering if we watched the same event. Take Tom Shales, the Washington Post's longtime TV critic. By virtue of his position and reputation, Shales is respected and influential, so I figure I should see what he has to say. Shales apparently watched a different show altogether:

"Ellen DeGeneres, doing a crisp and unpretentious job in her first gig as an Oscar host...

"Crisp"? I like Ellen, but she was flailing, telling jokes that wouldn't rouse the crowd at a Rotary Club luncheon.

"Time was wasted throughout the evening on a number of cutesy gimmicks that laid enormous eggs -- among them the avant-garde Pilobolus Dance Theatre, whose members posed behind a white screen and acted out the titles of film...

What? While I'm an avowed hater of interpretive dance numbers, this was easily the best "performance" innovation from the Academy in a long while. The Little Miss Sunshine and Snakes on a Plane bits were particularly good.

"As the third hour of the show approached, the stage was taken over by the cast of "Dreamgirls" for a medley of songs from the film. It was fine..."

You mean that little glass-shattering contest pitting Beyonce and Jennifer Hudson? This dreadful medley was "fine"?

"More time was wasted with a lame piece of "special material" -- a song about how comics don't win Oscars, performed by the usually hilarious Will Ferrell, the semi-talented John C. Reilly and hack Jack Black. The song wasn't funny and went on, yes, too long..."

John C. Reilly "semi-talented"? Sez who? And Jack Black, the unstoppable comic dynamo, is really...a "hack"? I'm beginning to have an idea of who the hack is, and it's not any of the three guys who staged this fairly hilarious number (by Oscar standards anyway).

Naturally, Shales didn't mention the real travesties: the needless montages (yet again), the exasperatingly pointless Chris Connelly backstage interludes (which added a good ten minutes to the show). To be fair, he at least took a shot at the night's nadir: Celine Dion, totally trashing Ennio Morricone's good name.

See, this wouldn't be a big deal if people like Tom Shales weren't actually influential. But last year, the bad reviews from idiots like Tom Shales doomed Jon Stewart's chances for another hosting gig, in spite that show being the funniest one in memory. To be fair, Shales probably isn't an idiot so much as he is a fuddy-duddy fiftysomething whose taste is seriously out of touch with younger viewers who live-blogged this thing. He's speaking to his crowd, Better Home & Gardens subscribers who guffaw at Don Rickles jokes in their La-Z chairs. Nothing wrong with being a mouthpiece for a niche group, but come on. The dude's opinion shouldn't carry *that* much weight. Well, one positive effect of the blogosphere: Tom Shales is now an endangered species, his influence diminishing every year.

As for the awards itself, hooray for Marty, boo on the Lubezski loss, and a tip of the hat for Leo, the king of the world, apparently. And goddammit, it really looked like both Peter O'Toole and Little Miss Sunshine were gonna take it home, which would've made me $400 dollars richer. Oh well. At least a really good movie nabbed the Best Picture this year.
Posted by Ryan at 5:44 PM