Postgame pundits describe the speech as workmanlike, and that's probably on the mark. President Obama's inaugural address nestles passages of startling power among prosaic, almost progrommatic declarations. As a speech, it was a bit disjointed. But as a call to arms for a new era? Fairly magnificent.

I'd like to focus on one point that I haven't seen elsewhere, about Obama's ambitious desire to change the mentality of Americans. Or rather, restore a previous, healthier mentality about work and sacrifice, the real values that undergird American greatness, according to Obama:

In reaffirming the greatness of our nation, we understand that greatness is never a given. It must be earned. Our journey has never been one of shortcuts or settling for less. It has not been the path for the faint-hearted, for those who prefer leisure over work, or seek only the pleasures of riches and fame.

Rather, it has been the risk-takers, the doers, the makers of things -- some celebrated, but more often men and women obscure in their labor -- who have carried us up the long, rugged path towards prosperity and freedom.

For us, they packed up their few worldly possessions and traveled across oceans in search of a new life. For us, they toiled in sweatshops and settled the West, endured the lash of the whip and plowed the hard earth. For us, they fought and died in places Concord and Gettysburg; Normandy and Khe Sanh.

Time and again these men and women struggled and sacrificed and worked till their hands were raw so that we might live a better life. They saw America as bigger than the sum of our individual ambitions; greater than all the differences of birth or wealth or faction.

Obama here is aiming straight at the financial crisis' root problem. Though the economic crisis is mind-bogglingly complex, the heart of our problems is the ethos of easy money (fanned, of course, by the easy credit/low-interest/deregulatory policies of the last twenty years). Think back to 2005, the year when "New Gilded Age" articles were in vogue. It was a hallucinary time, when high school grads in my office suite would be pulling in 250 large to process mortgage applications, when party conversation revolved around the latest real estate acquisition and/or remodeling woes, when folks watched shows like "Flip That House!", and when bonuses for money-swapping middlemen in their late-20s reached 8 figures. Everyone's got a shortcut to riches. And nobody really connected this loot to, you know, productivity, which is how income and wealth are generated. Folks forget, in bubble periods, that this great swell of dough is coming from somewhere. As it turns out, the money came due in 2008.

Obama, an adherent of behavioral economics, reminds us in this address that "those values upon which our success depends, honesty and hard work, courage and fair play, tolerance and curiosity, loyalty and patriotism" This focus on responsibility and hard work is the first salvo in the project to reverse a dangerous mentality that led to so many actors to make so many poor decisions.

In 1994, most people make between $30,000 and $80,000. To make 400K, you better have gotten lucky with the right business, put your money down on a longshot, or you're capable of removing human organs with some degree of precision. You made dough because your work provided economic value commisurate with your income, or you took a commisurate level of risk for your reward. Over the last fifteen years, but especially in the last five, the fruits of economic growth increasingly went to groups that didn't provide the corresponding economic value. Growth, and income was generated by transfers of money and the creation of clever financial instruments that promised risk-reducing miracles by offering derivative insurance and bets against defaults. With these new Wall Street overlords in charge, the banks see no problem lending $300,000 to a guy making 18 grand a year as the risk of default is sold off in packaged securities. The guy making $18 Gs doesn't see any problem buying a $300,000 house, because he thinks he can flip it in a year.

All of this were driven by financial innovations that disproprotionately benefit the middle man. In a sound economy, the middle people -- stock brokers, mortgage brokers, agents, accountants, lawyers, financiers, etc -- keep the wheels greased so the cogs of capitalism can turn efficiently. In our economy, the cogs were the middlepeople; financial services, a field that essentially performs complicated transfers of pre-existing money, became the dominant sector. It's just crazy.

Obama's task as president is nothing short of restructuring the US economy. A big part of that goal is reconfigure the engine so that green technology and its derivatives, rather than consumer, fuels our economy. But an important, if less discussed part of his task is refashioning American thinking so that individuals and institutions aren't driven by bad incentives, fallacies and poor framing of economic choices. Reminding folks that money = work is a good place to start.

- Giant Pool of Money, from This American Life -- perhaps the best explanation in layman's terms of the subprime mess that ignited the crisis. Everyone should listen to it.
- The NY Times "The Reckoning" series, very good pieces that serve as indictments of the major bad actors.
- The blog Calculated Risk, which was way ahead of everyone in sounding alarms, is worth checking out from time to time.
- This NY Times chart is pretty cool, too: 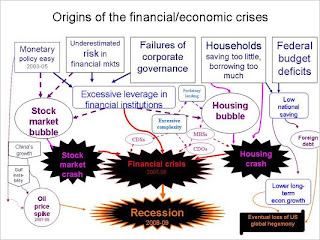 Update on 1/24/09: Frank Rich has a better piece expressing pretty much the same thoughts.
Posted by Ryan at 5:26 PM

Michelle Cottle has a very perceptive post discussing aggressive careerism in the context of the Caroline Kennedy debacle. Cottle's point is obvious, but some of us with high self-regard need to be reminded that, in order to get where you want to go, especially in this dire climate, proper decorum and "face" are drawbacks, as Cottle notes in discussing Burris vis-a-vis Kennedy:

The man was appointed to Obama's Senate seat by a governor charged with trying to sell that very seat, prompting many folks to ask how Burris could be so vulgar and shameless in his ambition. The entire Democratic leadership vowed that Ron Paul would be president before Burris would be seated in the Senate. But Burris reallllly wanted that job. So he showed up at the Capitol on swearing-in day and got himself very publicly kicked out. Undeterred, he kept on chugging, chatting up the drama-obsessed media, meeting with members of the caucus. And look at him now! Downing ice tea and warm rolls in the Senate dining room with the rest of the club.

Caroline wasn't pushy enough. She wasn't aggressive enough. And she wasn't shameless enough to power through all the hurdles in her path and take what she wanted. On the most basic level, I suppose you could chalk this whole mess up to her individual personality. (Certainly, neither Hillary! nor Sarah! would have folded so easily.) But when we're talking about the number of gals on the political landscape in general, it's worth noting that such Carolinian personality traits are not infrequently cited as contributing to the stubborn gender imbalance within a number of fields, my own included.

Though Cottle arrives at a gender-specific conclusion, the necessity of aggressive douchebaggery should be drilled into the heads of a whole category of talented men and women who don't want to appear too desperate in their career ambitions, leading to stalled lives and thwarted goals.
Posted by Ryan at 10:46 AM