* Sorry I've been away. You may sling rocks and arrows or hurl decomposed tomatoes at me for being a derilect blogger. You may not, however, call me a hipster. Thanks. 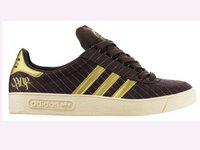 * To commemorate the grand opening of my cousin's boutique Grey One in Old Town Pasadena, I'm thinking of dropping a few bucks I recently picked up playing poker on some new kicks. This special ed. Adidas, designed by famed hapa artist Barry McGee, had looked pretty dope, though I now hesitate to pick a shoe that landed on the cover of WaPo as yet the subject of another "Asian stereotype" controversy. Evidently these well-meaning but misguided Asian American activists have never picked a Giant Robot.

(By the way, the content of the above item does not, in any way or form, hint at any hipster-ish tendencies I may or may not possess. So it would not be correct to call me a hipster. Thank you.)

* Wingnut Jonah Goldberg thinks Hollywood finally got it right with Thank You for Smoking. Seems that by portraying Aaron Eckhart's unctious lobbyist as amoral in the public sphere but a Family Guy in private, Hollywood's sending the right message about the wingers and the winger ethos. Dude might be peddling cancer sticks, but hey, don't hate him cuz he a Great Dad! It's not hard to think of Nick Naylor, a WASPy alpha male teeming with confidence, as a kind of idealized Republican, but Goldberg kids himself if he thinks that there are Republicans as attractively self-aware as Naylor. As for the family values stuff, wasn't this supposed to be a cynical satire? Who the hell decided to turn it into a fucking Steven Spielberg film? Memo to Reitman and Buckley: please pick up The Billy Wilder DVD set, and also Ace in the Hole (not included in the set). Watch them and take notes. Thanks.

* I'm not sure about this new Flight 93 movie, but if it's 1/20th as powerful as, say, this news story describing the contents of the flight recorder, it'll be worth catching. Beyond the pleas for mercy, what's most striking for me is how often the terrorists prayed to Allah. Religious nutcases can justify anything in the name of their god, including mass murder.

As for the Moussaoui trial, I thought the prosecutors' theory in applying the death penalty to be a stretch legally, but if anyone deserves execution just for being an evil scumbag, it's this guy. The dude clearly wants to be a martyr, doesn't he? I guess if I had to choose between 70 virgins servicing me in the sweet hereafter vs. a life being confined in utter misery, hated by everyone within a 1000 mile radius, I'd choose the guillotine as well.

* Another story about religious nutcases, this one involving Christianist wackos suing to overturn anti-discrimination laws against gays and lesbians and campus "tolerance" policies. It seems to me quite simple: Christianist wackos' right to *say* whatever the hell they want in the public square should not be abridged by the state. But employers have fairly broad rights over speech content in the workplace. Feeling oppressed cuz your boss won't let you wear your prized "God Hates Fags" t-shirt? Go start your own business, dickhead. Housing and job discrimination policies shouldn't protect gays because it's a "lifestyle choice"? Who says? And your superstitious wankery -- which grants you "special rights," I should add -- is somehow not a "lifestyle choice"?

(Just to be clear, Christianists are not the same thing as Christians. See (the Catholic) Andrew Sullivan for more.)

* The Religious right thinks Christianity is under assault. Muslims think Americans disrespect Islam. Many Jews are worried about widespread anti-Semitism. Yet what is far and away the most unpopular group? Atheists. It's not even close. Try running for public office as an atheist some time. Unless your district is the West Village, you're not getting anywhere. And some courts feel the need to favor the superstitious over the non-superstitious. Read this post by Eugene Volokh, which is like Camus' The Stranger come life. Isn't it rich how some white Christians, who comprise of 70% of the population and occupy 90% of the most powerful positions in this country, constantly whine about being under attack? By 2% of the country who are widely loathed?

* By the way, I once shook Tila Tequila's hand, back when she was merely a Friendster celeb. That Tila Tequila, all 4 foot 10 inches and 72 pounds of her, the one whom Slate has now endorsed for President. (More thoughts on networkng sites later.) 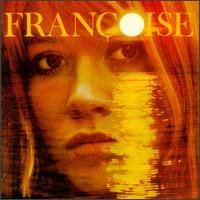 * The faux French band Nous Non Plus, a reincarnation of cult band Les Sans Culottes (the excruciating breakup of which is detailed in Slate), put a fun live show a couple of weeks ago at Spaceland. My Monsieur Gainsbourg Revisited (a Gainsbourg tribute album featuring Portishead, Jane Birkin, Franz Ferdinand, etc. -- though where's Luna's definitive "Bonnie and Clyde"?) is in the mail. The incomparable Francoise Hardy is seeing a new surge in popularity, at least according to Filter. A good time to be 60s Franco-pop enthusiast.

* Rejoice! Criterion will issue Edward Yang's masterpiece Yi Yi in July, in a characteristically awesome cover design. That bodes well for an eventual release of Yang's A Brighter Summer Day, my pick as the greatest film not yet on DVD. (Thanks to Vlad for the tip.) 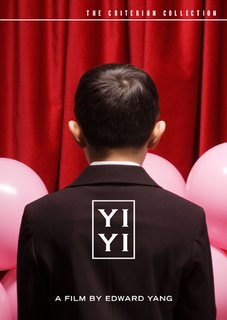 * Shrouded by a fog of cigarette smoke, Tony Leung sits alone in his French Quarters hotel room, playing John Coltrane and Duke Ellington's "In a Sentimental Mood", unable to shake the memory of lost love as the window shutters swing violently to-and-fro. That was the image my mind conjured up as I happened upon rumors that Wong Kar-wai was planning a Hurricane Katrina movie (it was to star Adrien Brody actually). Let's thank the movie gods that Wanker apparently changed his mind. His new film has nothing to do with Katrina. Vaguely described as a "road movie", My Blueberry Nights will star Norah Jones, Rachel Weisz and Jude Law and will be shooting in various American locations shortly. The description of this project brings to mind Wim Wenders' Paris, Texas and Antonioni's Zabriskie Point, films that heralded an "American period" of these two major foreign masters of mood and atmosphere. Ominously, it ushered in a period that ultimately led to creative paralysis for both. Wanker should do well to keep Tony on call.

His other English-speaking project, the Nicole Kidman period drama The Lady of Shanghai, is being pushed back to next year. 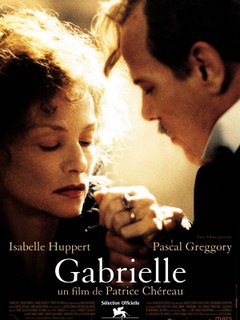 [Thoughts may be forthcoming concerning one of the following topics: (1) Chereau's dazzling formalism and how his gamesmanship -- on screen text, six or seven different lighting schemes -- puts just the right accent on the material; (2) how marriage sucks; (3) a battle of wills between a man who lusts after control and a woman yearning to reliquish control; (4) Huppert's obvious casting - Greggory less so; (5) why so many masterpieces emerge from strong-willed auteurs grappling with canonical 19th century/early 20th century literature; (6) chamber dramas as the most cinematic pictures ever shot -- paradox or not?; (7) comparisons to Love Streams, The Bitter Tears of Petra von Kant, or another cineaste-lauded work that bears a superficial similiarity to the movie under discusson.

Truthfully, I would not count on such thoughts being forthcoming. But if they do come forth, watch for more in this space.]
Posted by Ryan at 11:44 PM