Ever since I was about ten, a bowl of mac & cheese, preferably with sauce straight from the packet, is my idea of bliss. It's a shameful passion, I've learned, as my love for this classic American dish has earned me untold scorn and ridicule. Some have derided me as "a Chinese hobo!," while more sophisticated foodies hurled such sociopolitically astute insults as "Blue State trailer trash." You might as well profess a love for lawn furniture or Wayne Newton, so widely disrepected is that signature convenience food for midwestern adolescents. Artists have not been kind either. In Last Days, Gus Van Sant showed a Kurt Cobain (or Kurt wanna-be) so out of it, he threw the paper box in to the pot of boiling water. In Van Sant's telling, mac & cheese is the last refuge of helpless druggies, just a step above eating instant ramen dry.

Given how disreputable mac & cheese has been among the bobo set, I was shocked to learn that one of the most e-mailed articles of the week from the Bobo Bible was this one on the glories of traditional mac & cheese. 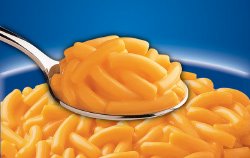 The writer has got it right. Classic mac & cheese is best. In a few nouveau American eateries, you'd find cooks attempting some of kitsch reinvention: organic durum wheat macaroni topped with gruyère and ingram rosemary and slices of viennese sausage. Dude, fuck that. For twenty bucks, I can place an order of toro and kampachi at a medium-tier sushi joint in LA. Frou-frou mac n' cheese is not only a sacrilege, it's an utterly unsavory reinvention. These nouveau American chefs are better off following Kurt Cobain's lead. Pour the sauce from the cheese-packet or stick a slice of raincoat-yellow all-American cheese on top of heated macaroni. For the coup de grâce -- five or six Oscar Meyer mini-hot dogs (y'know, those cute little brown things that look like Farrah Fawcett's distended nipples). Salt to taste and serve.

A badly designed butterfly ballot and some hanging chads changed the direction of this country and the world, in a way we could not have imagined back in 2000. Will the tides of history again alter course with breaking news of Sharon's likely incapacitation? Just four years ago, when he leveled the Jenin refugee camps, Ariel Sharon was the most widely loathed figure in world politics. Today, Sharon's is the most courageous and admirable leader on the world stage, a striding colossus amid a sea of dwarves.

If Sharon falls, I fear the Middle East may erupt in flames again.
Posted by Ryan at 4:19 PM

If Steven Soderbergh had directed Munich...

...he'd jettison the shots that call for Avner gazing forlornly at the model kitchen display, which is supposed to signify the sensitive Mossad assassin's anguish at being forced to choose between the duty and family (or rather, the Motherland and the Mother of his child).

...he might tell Tony Kushner to figure out a way to write a convincing reason for Avner to take the agonizing job in the first place -- besides providing some vague allusion to living up to an Absent Father.

...he likely would've shot the film in the same jittery, quicksilver style (lots of quick pans and jump cuts) with a desaturated color scheme as the actual Spielberg film (one of the best things about the movie), akin to his 70s-era-styled thriller Traffic.

...his cinematographer "Peter Andrews," though, would likely have avoided some of those interior shots with the Storaro-type high-contrast lighting schemes (scenes of Avner brooding in the shadows, backlit) that, in a film shot in a flat, documentarian style, sticks out like a Kandinsky at a Pre-Raphaelites exhibition.

...he also certainly would not have felt the need to reprise the "Girl in Red" scene from Schindler's List.

...would Chopper-Man burst into tears upon hearing his baby cry?

...he would likely have retained what works like gangbusters in the screenplay -- the riveting set-up, the foolproof subject matter, and the scenes between Avner and the mysterious Frenchies.

...he would likely have retained the screenplay's rather wishy-washy humanistic perspective which, as it so happens, is the correct moral stance on counterterrorism (essentially, counterterrorism perpetuates a cycle of vengeance and robs the avenging angels of their humanity, but hey, you've got a better solution?).

...unlike the film's actual director, he wouldn't feel compelled to continue the six or seven movie streak of marring a film with a scene so wildly misjudged, so embarrassingly maudlin, that you begin to wonder if Spielberg isn't routinely allowing Chris Columbus to ghost-direct three days a shoot while he tends to Dreamworks' troubled finances. Here, it's Avner orgasming to the flashback of the airport massacre, a cross-cutting folly that must be seen to be believed. (It's easily the worst sex scene in the movies since Marc Forster threw in random flash-inserts of P. Diddy as Billy Bob and Halle gets it on behind an obtrusive birdcage.)

...and most importantly, unlike the film's actual director, he'd realize that a movie about the central political issue of our time is not the place to indulge in yet another pointless iteration of the Absent Father/Must Be a Good Father theme.
Posted by Ryan at 2:14 AM