You know the type, the dude of boundless energy all in the service of, well, service. He's the "friend", the guy whom you can rely on to pick up your girlfriend from the airport when you've scored hard-earned tickets to see The Arcade Fire. But you don't make the call to him, she does; because he's not your friend, but her's. I'm talking about the helper guy.

In his native habitat, the helper guy can be anybody: a clown, a jock, a hipster, a worker bee. He's no different than any other guy.

But when he develops interest in a woman, the helper side takes over. The helper guy is there to pick up the birthday cake for his "good friend". He'll listen patiently to complaints about co-workers and respond with supportive comments. He'll listen patiently to complaints about the self-absorbed, inattentive boyfriend and respond with supportive comments. He's earnest, kind, helpful, and of course, trapped in the dreaded Friend Zone. Sometimes you appreciate that he's there to deal with shit so you don't have to. But I'm warning you to not get complacent: watch your back. Through sheer willpower, this dude can break free of the Friend Zone and leave you in the dust.

Don't get me wrong: I don't question the sincerity of the helper guy. I'm sure he's genuinely a "nice guy". Often, in other contexts, he's a good friend or even a relative. I've even learned to respect the helper guy, who has proved to be my most common and enduring romantic rival. Or at least his game, even as I mock it mercilessly. The helper guy's m.o. is to go Above and Beyond the Call of Duty. That's especially appreciated when the woman he's vying for is in a relationship or is courted by a guy who coasts on charm. He might bring the woman's ailing grandmother lunch on occasion. Or drive her to some buttfuck nowhere Ikea to return a regrettable desk lamp. The helper guy plays contrasts, and there's nobody a tireless nice guy would rather be the rival of than the lazy, charming cad.

The helper guy may genuinely just feel good helping out. But it's also clear that the helper guy is exploiting what he has -- labor, energy, and willingness to be enslaved -- to compensate for that which he lacks: often charisma, wit, charm, and sex appeal. Intuitively understanding these deficiencies, the helper guy makes it a tortoise-hare match. Slowly but surely plugging away, he shows himself as ever reliable and useful while the charming rake slowly builds up demerits. Too timid to make a move, the helper guy bides his time like a vulture, circling overhead until the contrast turns into his advantage. Then he'll swoop in.

I apologize for the female-objectifying tone of this post, where women are treated as trophies to be awarded to the most deft romantic performer (though that's how it works, isn't it?). Here at Maxim West, we do our best to restrict offensive analogies and metaphors to 3 per post, so be secure in knowing there are no more such comparisons. And perhaps I've been needlessly oblique, waiting until now to provide some examples. But let's have some, shall we?

* The classic illustration of this dynamic is to be found in

(where else?) Jane Austen's Sense and Sensibility. Willoughby is a dashing young rogue, the kind of guy who sweeps women off their feet. He's also a dastardly rake, which is revealed over time. Time also reveals that helper guy Colonel Brandon, well-intentioned, noble, and dependable (but also morose, colorless and generates no sexual tension whatsoever), is the right guy for Kate Winslet (!!!).

* But the dynamic depends on the teller. Howard Hawks 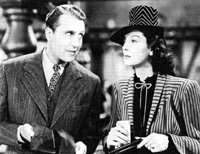 wasn't a worshipper of bland earnest types, and so my personal favorite illustration of right guy/wrong guy, His Girl Friday, finds the helper guy as a boring, helpless dolt, as personified by Ralph Bellamy (whom I had previously miscategorized as a tool).

Though initially won over by Bellamy's like-a-rock reliability, the woman of my celluloid dreams, Hildy Johnson, finally re-succumbs to the conniving ways and quick wit of Cary Grant. You get the feeling Hildy might've had faced less drama if she'd taken that train to Albany, but will she find fulfillment as an Albany housewife to an insurance salesman? I think not.

The helper guy can wear you down. By remaining ubiquitous and available, like a 24-hour 7-Eleven, he proves himself indispensable. By earning the woman's trust and listening to her gripes about her relationship, he can pick up enough information to write a step-by-step instruction pamphlet to win the woman's heart. And by being patient and stolid, he exposes you as the self-absorbed, inattentive, commitment-phobic man-child that you probably are.

In short, if you're...
(a) a helper guy, be patient: keep plugging away, bud, you'll win at the end.
(b) a girl with a helper guy, keep using him. He'll keep being used. And maybe you'll discover that he's not that bad. Kissing him won't be as gross as kissing your little brother.
(c) a girl without a helper guy. Go find one. I think Craig's List is supposed to launch a category called "Seeking Helper Guys" in June.
(d) the rival to the helper guy, you are probably thankful for the helper guy right now. He makes your life easier by doing things so you won't have to. Don't be thankful. Drive his ass out of your girlfriend's life now. Poison the well. Make fun of his pants. Insinuate that he's impotent. De-sexualize this dude completely before he finally overtakes you by being so inhumanly patient.

Do it now, before it's too late. Remember, the helper guy is not your friend.
Posted by Ryan at 3:24 PM

Appetizer for Kings and Queen

My girlfriend Jo will be happy to know that Arnaud Desplechin's Kings & Queen, which will almost certainly be my number 1 movie of 2005, opens in LA tomorrow. She'll soon no longer have to endure my constant whining, much like a ravenous child demanding a third Sausage McMuffin, about my "insatiable need" to see Kings & Queen again immediately. Hopefully, a second viewing will fill out the nascent thoughts sitting in my draft folder, leading to an actual substantive post sometime this year.

One little nugget for discussion: Is Emmanuelle Devos really that hot?
Posted by Ryan at 4:31 PM

Haven't been compelled to blog for a host of reasons, but this I have to pass this along just because this exchange is so satisfying. The army's facing severe recruiting shortfalls. Iraq remains mired in insurgency. And in this country, we have chickenshit Young Republicans and their idiotic bullshit.

Volunteer or shut the fuck up, you fucking wingnuts. Sorry for the profanity, but these "support the troops"-sticker-pasting, immigrant-maid-pampered, hypocritical, couch combatting, war-mongering, fantasy-world-living white nutbag pussies need to be spanked at least six times a day and nine on Sundays.
Posted by Ryan at 3:12 PM